If your visit the Hermetic Order of the Golden Dawn website HERE, you will find a fascinating letter called The Mind Virus that describes how the CIA continued Nazi concentration camp Dr. Joseph Mengele's research to develop a method of manipulating people through television, much like a virus of the mind.
Leslie McQuade and I, each month with the new appearing moon have been working Magick for a full year with as many people around the world as want to participate. Our intention is:

Meanwhile, Leslie and I would like to begin to expose to you how this Mind Virus works in action. We will be posting both articles and videos exposing this in coming months.
Today we begin with a particularly insidious and odious piece of mind virus programming. This scene is a still from the season finale of Star Trek Discovery. It is from the conclusion ceremony where the crew are given medals. 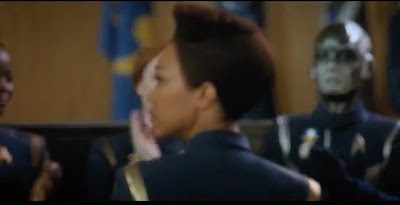 CIA Mind Virus Propaganda In Star Trek Discovery
Notice in the freeze frame how the android is given a medal too?  Of course. The message we are supposed to assimilate is that "like all the other races of the Federation, androids are people too."
This is straight up AI propaganda, programming us to accept that AI will have the same rights and privileges that human beings do. We know that this is Mind Virus propaganda for several reasons:

In this instance the programming was injected using the strong emotion evoked by the ceremony scene. Usually, it is injected as a flash following a scene of violence, torture, or other form of trauma. It was Nazi Dr. Joseph Mengele who discovered the value of trauma in programming the human mind. It was the CIA who weaponized Mengele's discovery when they discovered that they could deliver brainwashing programming to you using "micro-traumas" presented to you through your television by showing you scenes of rape, torture, murder, violence.
Stick around and Leslie and I will teach you how to spot and defend yourself against the CIA mind control programming brought to you by Hollywood and mainstream media! Together, we can still free humanity from ALL enchantment! Join with us tonight as we strike another blow for human freedom.
Posted by Imperator David Griffin at 10:20 AM 1 comment:

The Secret Of The Great Work

I was recently  asked on the HOGD Facebook group (that you can join HERE):


"I heard that every human has Light and Dark Part of his/her soul. My unanswered question is that, is it true? Is it possible for any human to be pure in his soul and spirit?"

Every human being has darkness and light inside us as matter and energy. The Great Work is the purification and transmutation of the matter of our bodies into pure solar energy using techniques of Rosicrucian Magick and Hermetic Alchemy. Hermetic science teaches us that consciousness only exists where "embodied.”
Consciousness, however, can be embodied in a material body or a purely energetic one. Our goal as Rosicrucians, is nothing less than the survival and continuation of consciousness upon death in a new body, a purely energetic body that exists eternally inside the universe of light inside the stars.
We are but caterpillars on our way to become butterflies. We were never meant to roll around the mud as slave workers on this rock we call Earth. The Earth is but a garden of souls. 2,000 years ago, the Master Christ, sowed seeds of salvation from this slave planet.Today we stand at the beginning of the Aquarian Age and the time of the harvest is at hand.
We are the Alpha and the Ωmega.
We are good farm hands, who come with sythes to gather Souls ripe for harvest - those ready to ascend wth us to the stars.
We human beings are the sons an daughters of the stars, and to the stars we shall all one day return, glorious in bodies of pure star fire!