(Las Vegas) Last month, pop singer Lana del Rey led a band of frenzied witches, egged on in numbers swollen by mainstream media promotion, in a misguided attempt to "bind" (attack) half of the American people together with our government.

People, the New York Times, the Sun, and other outlets report renewed black magick attacks on America planned for "the stroke of midnight March 26, April 24, and May 23." In response, the Hermetic Order of the Golden Dawn (AΩ) ancient mystery school issued a dire warning to the witch army, only to be inundated by requests from people wanting to learn how to protect themselves ahead of the next attacks.

As a public service, the Hermetic Order of the Golden Dawn (AΩ), in conjunction with Magick101.com, Lighting the Void, and  KTLK The Fringe FM therefore present the live FREE! webinar: 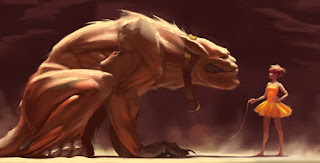 This webinar has expired.

Posted by Imperator David Griffin at 4:39 AM No comments:

(LAS VEGAS, NEVADA) - A truly historic, coordinated response is now underway to counter the public “gathering of witches” event that began February 24 and was organized by Black Magician, Michael M. Hughes. The event was mentioned in New York Times Magazine as a collective effort to use “Black Magick” to curse the presidential administration and all who support it (over half of the American people!). When asked why Michael M. Hughes wrote the ritual so it attacked the American people with demons, he replied:

"The demon part was added to freak out the evangelicals."

In other words, Hughes confesses that including demonic forces in the rite was for him just a cheap publicity stunt! 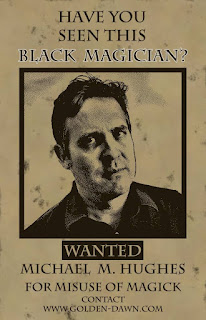 According to People magazine, Hughes and his unwittting band of Black Magicians have scheduled additional mass rites for March 26, April 24, and May 23, and June 21 at midnight.

The event has garnered the attention of an ancient secret order known as the Hermetic Order of the Golden Dawn (AΩ), who has come out in strong opposition to the event, and have issued a “dire warning” to all who would participate in the Black Arts during this negatively-charged group ritual.

According to David Griffin, Rosicrucian Imperator of the Golden Dawn, “Whether you believe in magic or not, studies have proven that when a large group of people focus on one thing at the same time, things can happen. With half the nation being targeted by large numbers of misguided spellcasters, witches, warlocks and those who do believe magic is real, we have a very real, potentially dangerous problem. That much negative energy infecting our society can have disastrous, potentially catastrophic consequences.”

To those who might question the validity of his claim, a two-month national demonstration conducted in Washington, DC between June 7th and July 30th in 1993 provided substantial evidence for a 23.3% reversal in violent crime, as a direct result of 4,000 participants meditating on reducing the violent crime rate in that area. It was predicted to drop by at least 20%.
(Source: www.worldpeacegroup.org/washington_crime_study.html)

“The effects created from a multitude of people all focusing on curses, hexes and spellcasting, don’t realize the power they’re playing with,” continued David.

“They’re going to destroy themselves and open doorways to very dark forces that are better left alone. We must counter-balance the negativity by coming out of the shadows to reveal our ancient knowledge which has been kept in secret for centuries. We believe strongly, that when the public realizes what they’re doing to themselves and to others, they’ll change.
Then the real work begins.” David concluded.

David and the Order of the Golden Dawn are calling on all believers in spirituality, manifesting, magic, the law of attraction, prayer and even positive thinkers, regardless of their race, religion, affiliation, beliefs, class or creed to join in efforts to combat the potential threat presented by the gathering of the witches event by synchronising our efforts through prayer, White Magick, etc, at the same times of their rites.

The next attack of the Black Witch Army is scheduled for March 26.
Don't get hexed! Learn to defend yourself against Black Magick at the free webinar with David Griffin and Leslie McQuade:
Black Magick Self-Defense (Emergency Crash Course)
March 24 at 7:00 PM PST
Register free. CLICK HERE NOW!