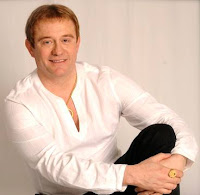 "If you are going to advertise that you can teach and initiate magicians so that they may be elevated to an Ipsissimus (the highest degree possible: 10 = 1) then learn how to spell that word before you post the advertisement. Not being able to spell this word certainly doesn’t give your potential students (or anyone else) the confidence that you know what you are talking about."


I wrote and thanked Frater Barrabbas for pointing out all the buzz in the magickal commiunity over the "Ipssissimus" typo on our order's newly redesigned website HERE.  In case you missed it before, our order just completely remodeled our website and online school; classroom, curriculum, teaching methods - everything - including bi-weekly Magick webinars FREE! for Golden Dawn members. 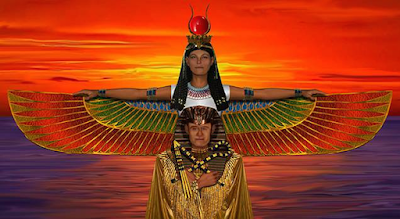 I also had a very serious word with our order's marketing company about the typo!


[Gerald Gardner's] "The Great Rite, however, was based on the Thelemic Gnostic Mass."

In my opinion, Thelemic zealots have overstated Crowley's influence on Wicca for years now, while simultaneously ignoring the importance to Wicca of Gerald Gardner's visit to the Villa of the Mysteries in Pompeii during his sojourn in Italy prior to formulating Wicca.

"I had always believed that witches belonged to an independent Stone Age cult whose rites were a mixture of superstition and reality ...
... and when I visited the Villa of the Mysteries at Pompeii I realised that the great resemblance to the cult. Apparently these people were using the witches' processes. I know, of course, that ancient and modern writers have agreed that the Greek mysteries of Dionysus, Zeus, Orpheus, Zagreus and Eleusis were similar; therefore since each mystery had different rites and myths but was the same, this must mean that they had some inner secret.
...Scholarship has made repeated efforts to discover what took place until the Villa of the Mysteries was discovered. The paintings contain the answer, for they extend all round the walls of the hall."

At the very centerpiece of the frescoes of the Villa dei Misteri in Pompeii, Italy, appears the Hieros Gamos, the wedding ceremony of Dionysos and Ariadne. Thus, it is clear The Great Rite finds its roots in the rites of ancient Paganism, as rediscovered by Gardener in the frescoes of the Villa of the Mysteries - rather than in Aleister Crowley and the OTO's Thelemic church. In fact, one might even wonder if the ancient Pagan sexual mysteries depicted in the Villa of the Mysteries,  might not be the true source of the sexual mysteries of OTO as well, despite misdirecting OTO origin lore about the orient. This would be the complete opposite of what Barrrabas has suggested.

The Hieros Gamos is by no means the only element of Wiccan ritual originating in the frescoes of the Villa of the Mysteries. For example, the Wiccan use of the scourge figures prominently below where a woman prepares to strike with a whip a young woman who is leaning on another's lap. 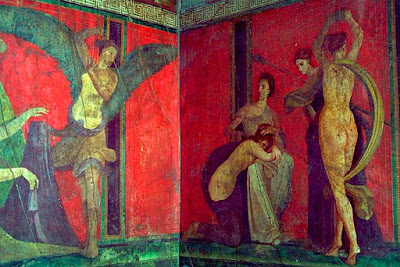 So, in response to Brian Watling's (aka Frater Barrabbas) questionable attribution of "The Great Rite" of Wicca to Aleister Crowley and the OTO's Gnostic Church, I have but one question:


"Where is our Wiccan scourge in your Crowelymass?" 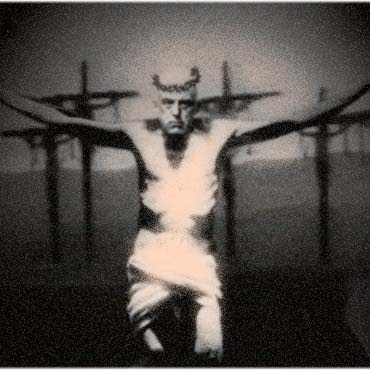 Rule No. 1 - When you convert to Thelema from Wicca, don't accuse adherants of your former religion of sectarianism while you misattribute the origins of Wicca to Aleister Crowley. It just makes you look silly!
Posted by Imperator David Griffin at 8:04 AM No comments: