Some moron in the witch community recently got the really really dumb idea to curse and bind the President of the United States, Donald Trump together with everyone who voted for him, and to bring down the American republic like in the tarot card, The Tower. This BLACK MAGICK ritual begins tonight at midnight. You can read about this seditious lunacy here.

As an American, I do not take kindly to a gang of Crypto-Nazi thugs pretending to be "progressive" witches launching a magical war on the American people and the lawfully elected President of the republic.

Therefore, Witch Queen Leslie McQuade and I this week have been discretely organizing the Magickal resistance to this evil nonsense.

Tonight at midnight, a rag-tag group of patriot Magicians, Witches, and Shamans, and Christian prayer warriors stand up in defense of the Republic and our President against the Black Magick war to be launched tonight by Crypto-Fascist witches - whose REAL objective is to establish a globalist world Empire!

They want to bind Donald Trump because they deludedly believe he is a Fascist. Perfect. We are redirecting their ritual to bind the REAL Fascists - like George Soros and the Islamic Supremacists the brainwashed American left is allied with.

They want to use "The Tower" tarot card to topple what they say is Trump's "Tower of Lies". Perfect. We are magnifying that spell to destroy the REAL tower of lies - the endless stream of mainstream media fake news narratives together with the whole globalist house of cards!

So - pick up your light saber, wand, sword, drum, feathers or whatever tools you use - and tonight at midnight - hold the line with us - as the Magi of Light rise in defense of the republic!


May the LVX be with you!

Posted by Imperator David Griffin at 6:22 AM 22 comments:

MEME MAGICK: Pepe the Frog and the Golden Toad

The Rise of Kek

One of the most interesting events of 2016, came when a bunch of "4chan kiddie coders" made the "discovery" that Magick is real and woke up to the reality of cultural magic (which I have been doing for years by the way - just look at some of my avatars). They called this "newly" discovered science "Meme Magic." 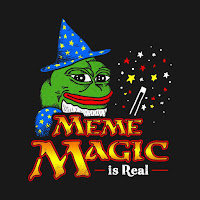 Everything got blown out of every proportion when to an angry old lady running for President screamed at meme frog Pepe on TV, calling him a racist and basically declaring Pepe an enemy of the state.

Getting yelled at by America's most famous angry old lady made Pepe the frog famous almost overnight (even while he was still in jail with meme cooties for getting hijacked by Nazis).

Meanwhile, the lore around Kek continued to grow, and Pepe fans began to view Kek as the God-like personification of the Internet itself, which Kek cultists view as SENTIENT! 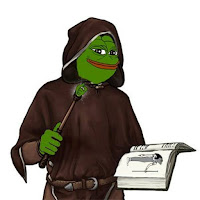 And so it came to pass that in 2016 that Pepe the Frog ascended to heaven assuming the mantle of God-like Meme status - and the first internet spawned religion was born - The Cult Of Kek! 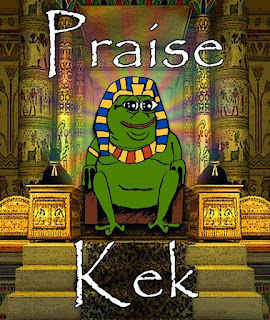 Kek cultists see Kek is the personification of the Internet. In the Golden Dawn, we use a technique called the "Assumption of God-Forms". To get to the bottom of this Kek mystery, I did substantial experiments to discover the magical functions of the Kek God-Form. It turns out that the Kek GodForm is best used for political magick and for exposing "fake news" and propaganda coming from mainstream media.

The bad news about Kek arriving on the cultural Magick scene in 2016 turns out to be terrible news for China. You see, the most widely used Magick figure in all of China is a Golden Toad called "Chan Chu" also known as the money toad. Chan Chu is a meme God who brings money and fortune into a home or business.

The Chinese have invoked The Golden Toad for centuries. In fact, many attribute China's economic boom in recent decades to all of the Golden Toad wealth magick Chinese businesses and households have been doing.

Consider this, together with what we know from the Golden Dawn about the power of God Forms, and the Magick of assuming them.

From where I sit, it looks to me like the Chinese have cast a powerful wealth spell. For sure, China has prospered greatly in recent decades at America's expense. Many of our factories have moved to China and with them went American jobs and American prosperity.

Clearly, the Chan Chu money magick of the Chinese has been highly effective.

There is only one problem for the Chinese in the magickal battle for the future of humanity.

Because of rules imposed by the Chinese government to fight overpopulation, for decades Chinese families have wanted only male children. Girls have either frequently been aborted, or when possible Chinese mothers have come to America to give birth to their baby girls.

... That the Golden Toad does not incarnate in China.

But instead comes to AMERICA to lead our nation back to the economic prosperity that is rightfully ours?

That's right. The Golden Toad has come to America as ....

The Rarest Of All Pepes!

Sorry China, you just got TRUMPED!

Posted by Imperator David Griffin at 8:43 AM No comments: