The meltdown of Hollywood and the fall of Harvey Weinstein has led to an amazing amount of truth about sexual and emotional abuse coming out.

For two decades, I have been privilege to a dark secret about the underbelly of modern Magick. I was trained in Magick by Cris Monnastre, Isreal Regardie's only long term disciple.

Israel Regardie once admitted to Chris Monnastre that he had been abused by Aleister Crowley. Apparently, there was both emotional and sexual abuse involved, during the period that Regardie was working as Crowley's secretary. In fact, Regardie stated to Monnastre in no uncertain terms that he had been raped by Crowley. 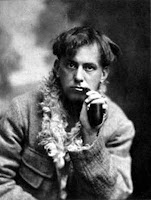 Regardie was so harmed by his relationship with Crowley, that it took him years to recover, led him to psychotherapy, and ultimately to become a Reichian therapist himself.

On the one hand, we have Regardie's bringing the importance of modern psychology to Magick as a consequence of the abuse. On the other hand, we have a continuing glorification of Aleister Crowley the abuser.

People have known for years that I detest and hate Crowley. Until now, I have always said it is because Crowley was betrayed the Golden Dawn, nearly destroying it.

Well, there is more to my hatred of Crowley than just that, but I could never say anything about it before now. Regardie asked Chris never to reveal this in public, as Regardie was deeply ashamed. In my opinion, Regardie had Stockhom syndrome as he admired Crowley until the day he died.

When Cris Monnastre shared this with me, she asked me to swear never to reveal this as she wanted to respect Regardie's wishes.

Last year Cris passed away, however, so now I feel I am no longer bound by that promise to her. In fact, the subject has become so actual now, I can no longer hold my silence.

I am very glad to finally get this off my chest. I have no doubt that this is real, Cris Monnastre had no reason to lie. I have reason to believe that others know about this as well. For example, CM told me her friend Poke Runyon once reported to her that Regardie once said to him:

"If you had known Crowley, Poke, he would have buggered you too. Crowley buggered everyone."

Poke Runyon and I are not friends. We have not spoken in 20 years. He probably would not say anything even if he knows, as hel leads  Thelemic order based on Crowley. I have no idea how much Poke Runyon knows, but I would not be surprised to discover there are others besides me, if not Poke, who have been privy to the secret of Regardie's rape and abuse. I encourage others to come forward and finally speak out about what you may know.

With all persons involved having finally passed away, there is no reason this should not come out fully now.

It is high time we clean out the Stygian stables of occultism. There is no reason to continue to protect the reputation of a rapist.
Posted by Imperator David Griffin at 11:08 AM