The Great Mage S.L. MacGregor Mathers founded the Hermetic Order of the Golden Dawn's Rosicrucian Inner Order, the Rosae Rubeae et Aurea Crucis in 1892. According to Mathers, he founded the R.R. et A.C. using materials from the mysterious "Secret Chiefs of the Third Order," whom Mathers claimed to have met in person during his sojourn in Paris in 1891.

"While repairing a part of the building of the College of the Holy Spirit, he endeavored to remove a brass memorial tablet which bore the names of certain brethren, and some other things. In this tablet was the head of a strong nail or bolt, so that when the tablet was forcibly wrenched away it pulled with it a large stone which thus partially uncovered a secret door, upon which was inscribed in large letters Post CXX Annos Patebo -- After an hundred and twenty years I shall open ...

... Now as yet we had not seen the dead body of our careful and wise father, we therefore removed the Altar aside, there we lifted up a strong plate of brass, and found a fair and worthy body, whole and unconsumed, as the same is here lively counterfeited, with all the Ornaments and Attires; in his hand he held a parchment book, called T."

Last week, the Ahathoor Temple No 7 in Paris rocked the Magickal community with yet again with another bomb shell:

Considering the importance of the Vault of the Adepti to the Golden Dawn and of the Tomb of the Founder, Christian Rosenkreutz, to the entire Rosicrucian movement, the discovery of the tomb of the Golden Dawn's Rosicrucian founder, S.L. MacGregor Mathers (nearly 120 years after his death), is an event of unparalleled Rosicrucian and magickal importance. 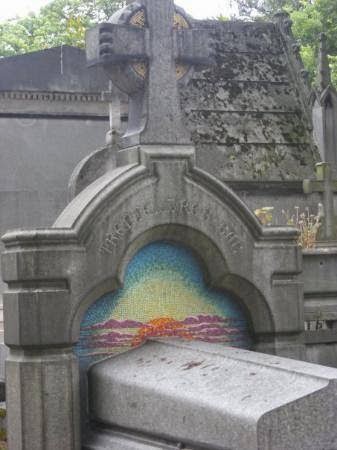 Tomb of the Golden Dawn's Rosicrucian Founder,
S.L. MacGregor Mathers (1854-1918)
For this article I interviewed GH Praemonstrator Ruggiu (7=4) regarding his discovery of Mathers' tomb. Here is what he had to say:

"Together with Nicolas Tereschenko we conducted a great deal of research into public records and cemeteries in Paris, but without success in finding Mathers' tomb. I continued my research for many years. Most recently, I sought and obtained permission to visit various private cemeteries in Paris.

It was in once such private cemetery that I finally discovered our Mathers' tomb. When I finally stood in front of the tomb of the founder of our order, it was amazing! The only feeling like this I have ever had was the first time I entered the Vault of the Adepti, like standing before the tomb of Christian Rosenkreutz.

I could not believe that I finally found it ! And the grave was so beautiful, filled with Golden Dawn symbols - The sun rising over the ocean made in mosaic - and even the Celtic cross above. There is also a mysterious inscription that I still can not decipher. It might even be in the Celtic language. I will publish my findings once I finally succeed to identify the script and translate the inscription. For the moment, I am keeping the location of the tomb secret, as there are so many quarrels on the Internet and people are acting so crazy in the Golden Dawn community."

When I met Jean-Pascal Ruggiu in 1995, he served as Imperator of Ahathoor Temple No. 7 in Paris, while Marquis Nicholas Terescheko served as Praemonstrator. This historic meeting signaled the beginning not only of an abiding friendship, but also of an important initiatic relationship, as GH Frater Ruggiu initiated me into the higher grades of the R.R. et A.C. When in 1997, GH Frater Ruggiu initiated me into the Adeptus Exemptus (7=4) grade, he invested me not only with various Golden Dawn and Rosicrucian lineages held by the Ahathoor Temple, but also a vast array of Gnostic lineages while consecrating me to the episcopate. Thanks to Jean-Pascal Ruggiu and Dr. Robert Word, today I one of but a handful of Pagan Gnostic Bishops. For all of this, I shall remain forever grateful.

The Athathoor Temple No. 7 of Paris today operates as an independent and autonomous, traditional Golden Dawn order under the authority of GH Praemonstrator Jean-Pascal Ruggiu (7=4), in formal amity with our order, the European headquartered Hermetic Order of the Golden Dawn®.